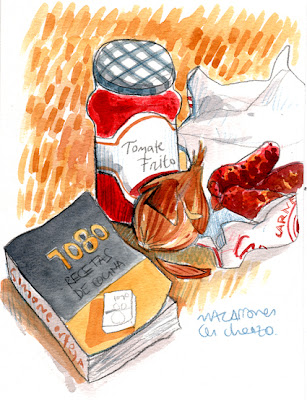 When I wrote this post about why I don´t like Spanish cookbooks, there was a certain mini buzz. Some agreed, some didn´t. Some pointed out that las milochenta, as 1080 recetas de cocina is usually known, is a really good book, really, really.
Now that it´s out in English, I´ve had occasion to rethink all that I said, and you know what? I stand my ground. Spanish books are no good, folks, sorry, but that´s how it goes.
The 1080 recipes as published by Phaidon is amazing. It´s so beautiful that I almost bought it yesterday, and in fact I probably will buy it. And why? For the text? No. I already have a copy of the text, the pretty boring text, one recipe after another, solid, old fashioned and in places quaint (margerine? drenching pasta in cold water after cooking it?). So the text is the same
It´s the book that´s gorgeous. The paper, the glue, the cardboard, the ink. The photographs, which made me drool over merluza en salsa verde, one of the dishes I´ve groaned most over all my life (that´s my thing. It´s very delicious; I just have merluza en salsa verde issues). And the illustrations...well.
Kill me. Seriously. Tear out my heart and feed it to wolves.
Why hasn´t this book been published in Spain? Because Spanish publishers are too stingy to pay Mariscal to make hundreds of drawings, that´s why. Why hire the most famous illustrator/designer in Spain, when you can make a perfectly soporiferous edition with some XIXth century clip-art etchings? Why would you want to make something as pedestrian as scrambled eggs come alive with a bunch of squiggly colourful lines? This is a book, after all, and it practically sells itself, no need to spend money on it.
So you see, if I were in an apocalyptic mood, I´d say this is the Armada all over again. But I´m not. I´m in a good mood. This book makes me see Spanish food as it should be seen, as people abroad see it. When I read "potaje de garbanzos" I don´t see the mock-horror pallid version I was served at school, but something else. It´s the Mediterranean dream, the orange blossom, lace mantilla, donkey at the door, guitars and geraniums version of garbanzos. Which is great.
And because a good mood and 4ºC entitle one to a certain calorific leeway, here´s a recipe for the standard comfort food classic, macarrones con chorizo, our mac n´cheese. It´s not the one in 1080, but the one we make at home.

Macarrones con chorizo
500 gr. penne rigate
2 cooking chorizos
1 big jar (about 500 gr.) of good tomato sauce
1 onion, minced
1 clove of garlic, if you like
maybe a dash of cayenne
Manchego or gruyère, grated, as much as you like

Boil the pasta, and preheat the oven to 180ºC.
In a wide frying pan, heat some olive oil and sautée the chorizo and finely chopped onion. The idea is to make this as the pasta cooks, so it has to be a strong fire. Ideally you´d do this slowly, but this isn´t a dish for finesse.
Once they´re cooked and orange from the pimentón in the chorizo, add the tomato sauce and give it a good stirring bubble. Add some sugar, chili, etc, to taste. Maybe even a dash of ketchup (shh).Toss the pasta with the sauce. It might not look too well coated, but that´s ok.
Put it in a gratin dish, dot with the grated cheese, and leave it in the oven until golden and crusty.
Try to sit next to the person who picks out the chorizo and leaves it on the side of the plate (me).
Posted by lobstersquad at 11:49 a. m.

I've seen the 1080 book (in English) and have not raced out to buy it, after hurrying to buy The Silver Spoon and finding it disappointing. But now I am encouraged to try 1080. And your mac 'n cheese recipe? I'm definitely going to try that!

I was just looking at this book in the store. I've wanted to learn more about Spanish cooking. Will it help me learn how to make traditional dishes? The problem that often occurs is that cookbooks are promoted as "Spanish" or "Italian" but it's sometimes hard to know when you're getting the real deal.

Just stumbled across your wonderful blog, and I'm going to put a link to it on mine. It made me miss Spain. Thank you for such excellent reading!
www.spoonbreadforhieronymus.blogspot.com

I'm still on the fence with the book. I have not paged thru it's illustrations yet, but i'm sure I'm going to buy it the minute I browse through the book. Your mac and cheese looks awesome!

I was sent a little advertising thing about the English version-I think the idea was that I was supposed to go and buy it, and then review it in the blog. But it is very expensive- though the pictures look pretty.

Do you think the recipes are worth it?

xps: qué cosas dices, mama!
Lydia: I think it´s a twin of the Silver Spoon. The look is gorgeous, but the book was written 40 years ago, and it shows. be warned
Guru: ole ole, a mi vera.
T.W.Barrit: this is the real deal, ok, but it´s a bit hard to cook from if you don´t know Spanish food very well. It´s not descriptive, or evocative, just plain practical.
Backstory: thanks, and welcome!
Veron: the book is very browsable. Just the illustrations are enough to drool over.
Lindy: I was sent the same ad, I don´t know what they´re about. The book is worth it for the look, and for history, but I don´t use it all that much. YOu´re probably better off with The New Spanish Kitchen until Claudia ROden writes hers.

From my new computer I wanna say that you should be the one doing the drawings, you're a perfect cook and deserve it...because you'll add a new view and colour to our spanish cooking...

Congratulations!
Have a look at www.deependdining.com and You will be surprised.
All the best,
Louie

Hi Ximena
I just went to Fressack's link - Congratulations, my dear!! You deserve the accolade. I so agree that you are in a league of you own :) I will be celebrating here in Singapore with champagne :)

Aside from the pretty pictures, I have to admit to not being bowled over by 1080 recipes. I flicked through it at the bookstore and decided it couldn't tell me anything Anya von Bremzen, Penelope Casas or Colman Andrews haven't already. And have you heard that Paula Wolfert's next book is on Spain? I think I'll save my pennies for that.
p.s. That sounds just like my Basque mother's macarrones, only that she put emmenthal on top. Mmmm!

Oops, make that Claudia Roden. I got my rumors crossed!

Inés: me alegro, a que son ricos? es una de mis recetas estrella
Petite guitar: welcome to the new world, baby
Fressac: thanks, it´s so exciting!!!
San: let´s all celebrate all over, thank you very much
Lego: ya, todos no , claro, pero como el 1080 es el más famoso, pues no hay mucho remedio, lo imitan, y es un doló auténtico.
Melissa: I´m waiting for Claudia Roden´s impatiently, too. It´s bound to be amazing.
And my mother is a big fan of emmenthal, too. Not me, but it´s a Spanish classic topping for macarrones.

Hi, I´d like to introduce you to my blog. Pop up as often as you feel like.

Oooooh! I've been hemming and hawing over whether I should buy that book or not. I think you just sold it. Thanks Ximena!

Came to see if you've got a good recipe for chorizo y garbanzos, but saw this instead. Will make it very-very soon (actually, I made a chorizo pasta bake few weeks ago, and it was brilliant, so I know already that I'd love this).

Oh well. Read the whole post carefully - and without three kids demanding your attention at the same time! This is the oven-baked version. Will compare your version to the one I made recently.

I do have a sneaking suspicion about which one will win :)