Hearty soups and an Anglo-Sherry condiment. 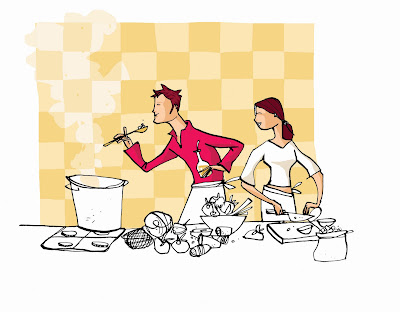 Here´s the hearty potaje I promised. A potaje is a thick soup/stew made in one pot and containing a variety of vegetables, some kind of bean and various assorted cured bits of pork, anything from a few rounds of chorizo to a whole pig´s ear.
And yes, I wrote about it a year ago. It can´t be helped, soups have a habit of turning up again and again. They´re never exactly the same, of course, but they´re pretty much sister soups, and I can´t justify whole blog posts about each one. All potajes are more or less the same, in spirit if not in deed, and they benefit from being prepard to fit a general pattern rather than a strict recipe, I think.

All I can say is:

1-make your life easier, and use tinned or jarred beans or chickpeas (not lentils). It´s the one sure and painless way of knowing they won´t be hard, or mushy, but just right. If you´re cooking for a crowd, look out for the 3kg. tins. They´re so cool, I´m longing to buy one, but haven´t yet found the right occasion for it.

2- Start with a sofrito. It doesn´t matter what it is, wether the Italian onion-celery-carrot or the Spanish onion-pepper-garlic-tomato, a mixture or the two, or whatever you have around. This isn´t traditional here, but it helps things along so much that:

3- you don´t really need so much pork floating around. It´s good, yes, but it will also make the thing heavy, and you´ll either have to restrain yourself to a single bowl (impossible) or spend the rest of the afternoon in a dazed stupor.

4- instead, mix lots of vegetables in. My last success had onion, carrot, celery, cabbage, potato, tomatoes, green beans and spinach, as well as chickpeas. Even my father, that notorious carnivore, had a big bowl.

5- Finishing touches in a contrasting colour make it so much prettier than the usual sludgy brown. Consider spinach, peas, parsley, or even cherry tomatoes.

6- I always have the second bowl mixed with salad. I love the crunch and the vinegary touch.
If you can´t be bothered to make a salad, some hot peppers in brine will do nicely, or failing that, just a dash of vinegar or lemon juice.

Or, you can do what J´s mother tells me is an old Anglo-Sherry* tradition:

Put a garlic clove and a hot chili pepper in a jar and fill it with dry sherry, sherry vinegar or a mixture of the two. Leave it to seep for a week, and use it to drizzle over your lentejas/garbanzos/judías.

I´ve never tried it, but will make a jar today so it´s ready by the time I return on Monday. We´re going to Málaga. Will report back. Happy Thanksgiving or just plain old weekend.

*Anglo-Sherry is the affectionate term for the descendants of the English, Irish or French winemakers and exporters who came to Jerez in the XVIII century and made the town and the wine famous.
Posted by lobstersquad at 11:30 a. m.

These are my favorite kind of soups -- you throw a bunch of things in a pot, and something good comes out!

I love the soup and enjoy the draw!!! Gloria

I've tagged you for the 8 happy thoughts meme. Hope that you enjoy doing it.

Thanks for spelling the whole potaje method out...you've made it so much simpler! I love all kinds of potajes...fabada is my favorite (is that considered?) :) I'll try experimenting with more veggies...

lydia: best thing ever hwen it´s cold
Gloria: thank you, it´s nice soup
Fiona: thaks, I´ll do it soon.
Joey: it´s easier for sure. Works for fabada, too, and yes, of course, fabada is the ur potaje. but if you put veg in it it won´t really be fabada, I´m afraid.