The art of breakfast: Thermomix porridge 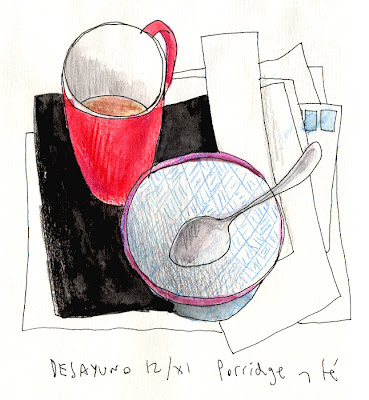 The cold has finally kicked in, so I´ve had my first bowl of porridge this morning. I went for it without looking up the recipe, because I thought that, having made it dozens of times over last year would have ingrained the thing deep in my brain.

Not so. I realized, five minutes into the process, that I´d skipped a couple of the steps in this recipe . But when it came out perfecty, I realized I´d actually simplified the whole thing so much that it´s now a no brainer, easier than ever, omigod unbeliable return on investment.

No bringing the water to the boil, no scattering of the cereal. Because the Thermomix stirs as it heats, you can bung in a cup of rolled oats, pulse number 6 a couple of times so they´re steel cut, add two cups of water and then either leave the thing 8 minutes at 100º, or start with Varoma for 3 minutes and then turn down to 90ºC.

Instant oats, but the real thing. The perfect breakfast, with brown sugar and milk. I´m so happy to have discovered this, and also this blog, which I´m loving already. My drawing is a kind of sketchy homage.
Posted by lobstersquad at 12:36 p. m.

It's definitely the season for hot breakfast -- and for rolled oats, apparently -- I've just written about them, too! I do like the way you cook them.

love your site. your drawings are beautiful!

i always make mine in the tx, too - can't be asked to stir for 15 minutes in the morning and i am steering clear of the microwave as well. i make mine with orange juice and water (lactose-intolerant) and tons of dried fruit and nuts... the more, the better!

Just discover your blog today! What a stunning blog. Love all of your sketch and drawing!

Rolled oats for breakfasts is lovely! Unfortunately, I never have cold mornings :( Nor a thermomix :( But I still enjoy it :) :) I like to place some grated apple in when it's cooking...yum!

Thanks for the link to the Simply Breakfast blog...It's fantastic!

I've been having porridge for breakfast for weeks - it's been freezing! However, no Thermomix to do miracles in my kitchen, simply a saucepan and a wooden spoon:)
PS Thanks for that breakfast blog link - I loved it!!

Thanks for this! I will be using my Thermomix for porridge from now on... geeky question, do you cover it completely or leave the little plastic bit off so that some steam escapes?

I've always been a fan of Scotts Porage (note the alternate spelling) Oats and am a strict adherent to a simple recipe. Milk, water, salt, oats, heat and eat - a light sprinkling of demerara is permitted; the little pools of melted sugar that form on the top are particularly special.