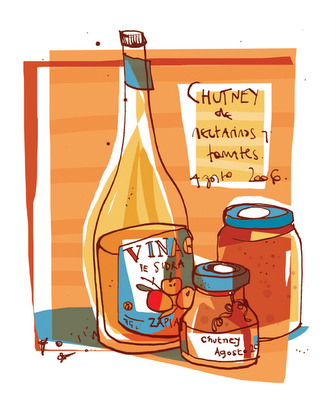 José was saying just yesterday how he hates the end of August. Because it´s still hot, and nobody´s around, and you can´t get any work done, and the countryside is baked to a crust, dry and horrid.
I had just been thinking how I love the end of August. Because nobody´s around, and you don´t have to get any work done. And because that baked countryside is producing tons of my favourite foodstuffs. And since there´s not much to do, what better excuse to make preserves?
Evidently everyone seems to be thinking along the same lines, and Nicky and Oliver of Delicous Dayshave made them the subject of this month´s Sugar High Friday.
Now I am above all things lazy. And hooked on season one of The West Wing. So I have no time for candy thermometers, fruit pectin or jelly bags. I love the rush of smugness that hits when you label and put up your very own jars of fruit preserves, but I´m sloppy. And I love vinegar.
So of course it has to be chutney. I love chutney so much, I put it in practically anything that´s not breakfast cereal, and that only because I don´t have cereal for breakfast.

I use the "glutney" recipe from the River cottage cookbook, adapted to fit the two-litre capacity of a Thermomix.
It´s very accomodating, and works with any combination of fruits and vegetables you might come up with, within reason. As long as you respect the ratio of fruit to sugar and vinegar, you´re in business.

Chop one and a half kilos of fruit or veg, one onion, one apple, one fresh chili (or more),250 ml cider vinegar, 200 gr. of sugar, a handful of raisins.
The spices are negotiable, but I like 1 tbs black peppercorns, 1tsp coriander seeds, 1tsp. ground ginger, 3 cloves. You can tie them up in a teabag, but I think they look very pretty once the thing is in the jar.

You put all this in a pan, and leave it to simmer for about an hour and a half, or until thick and gloopy. It sticks. Beware.
For the Th, give it 45 minutes at 100º,speed 1, and 45 more at Varoma. Check near the end, in case it reduces too much.
Spoon into jars and give it 20 minutes in a bain marie.

Write down every batch that you make. No two are alike, but sometimes you strike a particulary wonderful one and it does well to keep a track record.
My own batch today was 4 nectarines and 4 tomatoes. It looks pretty amazing, a dark brown in which cunks of nectarine looks a paler ochre. The flecks of chili and the black peppercorns give it a pretty looking contrast. I won´t open it for a couple of months at least, but I think I´m onto a winning batch. I´ll keep you posted.
My labels are pretty pedestrian, typed on an old Hispano Olivetti, which gives them an early industrial mechanical feel that I quite like.

While it cooks, you can watch exactly two episodes of West Wing. Perfect.
Posted by lobstersquad at 2:26 p. m.

Excuse me for my ignorance but... what is SHF?
I love chutneys too. I could eat with almost everything!

I am just like you. I love the end of August.

Looks like a nice chutney.
And ahah, P. my hubbie is stillr trying to convince to watch West Wing. Too fast for me ;-)

this sounds amazing, and I absolutely love the colours in your illustration. I have never made chutney before but you make it sound very achievable.

I adore both chutney and The West Wing. I am jealous that you are only on season 1 - I am currently on season 6 and trying to stretch it out as long as I can.

I made some kumquat chutney last year that was quite yummy - it was good on pork - but alas did not follow your oh so prudent instructions to write down how it was made. So I will have to rediscover it sometime! I will try yours - it sounds fabulous!

anónimo: it´s Sugar High Friday, a monthly blog event. this month´s theme is "can you can?"
Bea: at the risk of sounding like your great-grandmother, I´ll say "listen to your husband". the west wing is awsome
Jenjen: trust me, it´s the easiest thing ever. far more than your amazing looking jams
Faith: I´m soooo hooked on the west wing. I rent out the dvds, and have to watch it really quickly, so I´ll catch up all too soon. Please rediscover the kumquat chutney, it sounds really great
Xps: aqui te espero con que panico xime para un curry

Puttering around the kitchen while watching television is one of life's great pleasures. And although I have never done it I bet putting the labels on your own jars of chutney is another one.

West Wing is a wonderful show -- great writing. I also used to love another Aaron Sorkin show called Sports Night and was beyond depressed when it was cancelled.

I love your blog. The illustrations are wonderful.

Maybe I need a tv in my kitchen...with a dvd player.Somehow, nothing is ever on at the same time I want to watch it. Most of the tv I end up watching is on dvd-a season late.

This sounds very special, but nothing can beat that onion jam. I was thinking of canning some, and giving it as gifts. I use it all the time. Can't thank you enough for that recipe!

mary: thanks for the visit!
julie, lindy: I don´t actually have the tv in the kitchen. I´m very spoiled, and the thermomix has a timer, and stirs things while they boil, so I just program 45 minutes and go to the sofa for an episode of west wing, and then again.
I´m so glad you like the onion jam. I tried to do the giving away thing once, but ended up keeping everything for myself. It´s just too good.

As usual, your illustrations are cute and absolutely stunning :) And I love this post about chutneys - I've never tried making any preserves, but your guide makes it seem like an absolute breeze!

Ellie: sorry to be unclear. Th. is short for thermomix, a food processor I use to make the chutney. varoma is one of the buttons.
you don´t have to use it, just put everything in a pot and let it simmer for 90 minutes, stirring every now and then so it doesn´t stick.
I use the Th. because it heats as well as stirs, so I just program it and go away. but it really is a breeze to make without it, you just have to watch it a bit more.

BTW - If you like West Wing, you should see if you can find Aaron Sorkin's earlier work, Sports Night... I can watch those again and again and again.

I love chutney too! I've just embarked on making fruit jams, so after I master that, I will go for chutney. Thanks for making it sound easy.

I adore chutney, and have made a number of different types in the past few years. I usually find a recipe that sounds good and then hunt for the ingredietnts; I love the idea of a master recipe that works for whatever produce you have around. Thanks!