The Baltic trip, part I 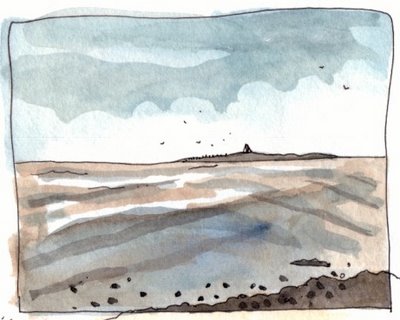 So, Estonia and Latvia.

It´s been a lovely trip. We milled around for fifteen days, feeling totally cut off from real life, wandering around the train-set towns, and walking in the fairy tale forests.
For a Spaniard , it´s all very exotic. Flat as your hand, with endless pine and birch forests, huge sluggish rivers, lakes all over the place, and the sweetest little wooden houses, painted in bright colours.The coast is the best, with amazing beaches, practically empty, and a lot of romantic peninsulas with lighthouses at the end.

I will be totally honest with you, though. This was not a chowhounding trip. I won´t pretend I spent the time looking into obscure alleyways and far-flug suburbs for the best piroshki, because I didn´t. I was lazy as lazy can be, and often plumped for the nearest and easiest places. Sometimes, even, goshelpme, the self-same hotels.

Im my defence I´ll say that we went to pretty remote places, and those hotels or B&Bs were all there was. And that suited me just fine.

Another thing that will doubtless disqualify me forever with serious foodies is that we didn´t always sample the local cuisine. It´s the kind of top-heavy, meat-cabbage-potatoes kind, very delicious, and a life saver if you´ve spent the morning shovelling snow. But for summer, hardly the ideal nosh. And anyway the locals, like everywhere else, are mostly hanging out at Italian reastaurants, or burger joints.

So, discounting the odd pizza, steak sandwich, and an Indian meal in Jurmala that was truly excellent, I´ll tell you what ethnic food we had.If anyone´s interested in names and places, email me, because I can´t be bothered to type it all out.

There was a cabbage roll stuffed with meat, very similar to the Ukrainian golupsi.The ubiquitous herring, which I´m not crazy about. It tastes like the big bully cousin of boquerones. Various potato and/or beetroot salads. Beetroot soup, both hot and cold. Solyanka, a Russian soup that seemed to consist mostly of potatoes, meat, sausage and cut up gherkins. It´s sour, hearty and so delicious, I´d never have thought it possible to like gherkins in soup, but there you are.
Dill, and lashings of sour cream with everything. Cucumber, either pickled or fresh, seems to be a big hit over there, and comes on the side of everything. As well as tomatoes, which I thought surprisingly excellent, until I noticed that almost everyone seems to have a little greenhouse with a few plants.
And their dense, chewy black bread, that I really love.
For breakfast, I always had it with butter and smoked ham.And a bowl of lovely porridge, thick and bland and more satisfying than I could beleive, with jam, often home made, and often from berries I´d never seen before.The porridge was sometimes oats, sometimes semolina, and always wonderful, fit for Goldilocks.
In Tallin we went to a really good Georgian/Armenian restaurant, where we had a whole lot of incredibly delicious things, and I forgot to write out their names. They were mostly the vegetable starters, all beans and aubergines and spinach , with tonnes of garlic. And the famous cheese flatbread in Nigella´s Feast. They gave us a cheat´s version with puff pastry, but it was still delicious.

I really enjoyed checking out the supermarkets, and the markets. Best by far was Riga Central Market, of which more some other time. More to come in the Baltic,part II.
Posted by lobstersquad at 4:43 p. m.

And I wish I could try that "Solyanka"!