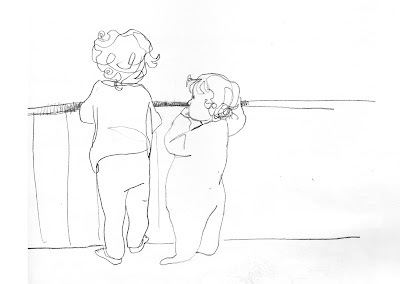 I think often think back to when my kids ate everything, and I was pleased. Their father was ecstatic. So much so that he gloated, and was heard boasting that Pía preferred broccoli to French toast. And so of course, smugness brought us down. I warned him, but to no avail. Now they eat nothing.

That is, they eat pasta and toast, and fish fingers, and eggs, and bananas and sometimes tinned peaches. And blueberries and mango (expensive little critters). Nutella and ice cream, need I mention. Pizza, sometimes. Chicken, in some incarnations.

At nursery they eat a whole lot of other stuff, but at home, that´s it.

So I´m very happy to have found that they like this cheese and apple on toast, which I like to call (forgive me) Newton´s rabbit, it being like Welsh rabbit but having apples, and so, you know.
I took the idea from The River Cottage Baby and Toddler book, an infuriating volume chock full of dishes my children would run a mile from.

However, this they like, and it´s easy and actually delicious, which makes it an excellent bet for sudden adult hunger pangs on a near empty fridge, or for bulking up a meagre bowl of soup.

Just grate an apple, some cheese of the Cheddar or Manchego type, cover a slice of toast, grill/broil it until brown and crunchy and that´s it.
Posted by lobstersquad at 2:05 p. m.

Newton's rabbit sounds fab! I had Manchego for the first time this week. On deep fried potato skins with porcini salt. It was grand. Do your babies eat Manchego?

Nice blog, hi friend, i found that there is one website offering free puzzle games. just take one minute to sign up then you will receive one free puzzle game. Its URL is http://www.684899.com/en/CosmicCreature/project_1.htm Click the below button of the page to get in. I've done it and now i am enjoying it.

Sounds yummy. And my son will even eat Manchego OR Cheddar. I will have to give this a try. I'm constantly trying to get some fruit and veg into the boy.