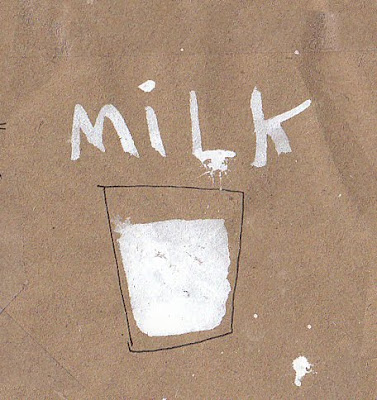 On Monday morning I spotted a bottle of goat´s milk in the discounted section of my supermarket.
I know what you´re thinking: "call child protection services before this crazy woman poisons her family".
But consider. This was very good organic goat´s milk, at 35 pence the litre, on the day before the sell by date, and if I didn´t take it home it would be trown away, which is wrong for so many reasons.
I would to use it to make requesón, which is a way of preserving milk, see? It makes perfect sense, really, because it´s the most delicate, creamy requesón you´ll ever have, and you just can´t buy it, not where I live, anyway.

I won´t write down the recipe because it´s dead simple. Follow the rules as laid down by the great Russ Parsons.

If youl use goat´s milk instead of cow´s, the curds will be finer, and look like they haven´t sepparated. Just strain them very carefully and prepare to be amazed.

If you´re thinking of using semi skimmed milk, don´t. I found a bottle of Yeo Valley Organic semi skimmed yesterday, also discounted, and it was ok but nowhere nearly as good as a full milk version would have been.

From now on, I´ll be on the prowl for cheap milk, because it takes five seconds to make and is a very versatile ingredient, altough I mostly smear it on toast and top with honey, it´s so good simply like that.
Posted by lobstersquad at 11:22 a. m.

The method you've linked is exactly how we make paneer in India, but paneer is not ricotta, so I've been reading online and seems like what you've made is technically cottage cheese (paneer).

By the way, have you ever found buttermilk in Madrid? Whats it called in spanish?

Sang; hi. i know, it's requeson, technically, but the original article called it ricotta so i went along.
You can find buttermilk in the corte ingles in serrano, the one at the corner with ayala, in the basement gourmet section. Gosh I feel homesick typing this...

And sang, it doesn;t have a name in spanish that I know. At the corte ingles they have a german import and it's buttermilch I think

I've made this once...you are right, I should be making this a lot more often!

Gosh, you're turning into a really thrifty Scottish superwoman up there!
Hugs pxx

Great choice! The fat molecules in goats milk are smaller, more similar to those of human milk, than cows milk, therefore allowing better absorption and digestion and thus better health.

is it ture that in goats's milk fat is less then that of cow or buffalo milk?

I have made paneer ages ago, but to get different tastes of your 'cottage cheese' you can either use lemon juice, whey (the left over from the last cottage cheese production) or citric acid as a powder.

is it ture that in goats's milk fat is less then that of cow or buffalo milk?

Islamic art: I have no idea, sorry. I know it´s very different, and OK for lactose intolerants, but no more.