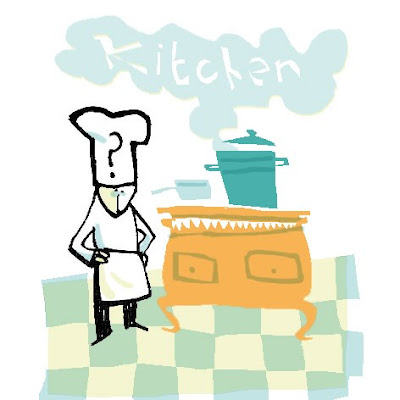 In a world where food is more than just food, and people watch cooking shows before ordering takeout, the kitchen is the scene for the new moral battle, and food writers more often than not come across as a little preachy. There´s the fire and brimstone brigade, who see hell in a grain of wheat, eternity in a goji berry. Or the new Puritans, who will have you Grow Your Own, lest the carbon footprint turn the food to ashes in your mouth.

Wether the concern is ecological or medical, there´s a whole lot of tut tutting going on, and in all this Nigella preetends to be the seductive temptress, but don't be fooled; she's not the Venus in Tannhäuser, but the whole singing and dancing chorus of nuns from "The sound of music". With her, it's all about Love. The hills are alive, the supermarkets chock full of delectable ingredients, all year round, and if your eggs are organic so much the better, but don't knock the marshmallows or the green food colouring. Just cook the food, enjoy it, move on.Bless her.

I´ve tried two recipes from the new book already. At first I wasn´t very convinced. It seemed to me that she´d done a sort of How to Eat for dummies, but now I´m won over. Yes, a lot of the recipes are versions of older ones in other of her books, but that makes a lot of sense. People change, lifestyles change, you don´t do things the same way all the time. And if you may find it hard to beleive that the 1999 Nigella, working at a newspaper and with two small children, found time to make stock from scratch, while the 2010 celebrity, surrounded by assistants, insists on ready made, well, who cares? The important thing is that the recipes are pared down and easier, but still real food, and still delicious.

Here are the duck legs I made yesterday. They were crisp and tender and flavourful, but the star were the potatoes. Brimming with duck fat and shatteringly crunchy, they are by far the best roast potatoes anybody´s ever had. If you´ve had better, I envy you. Or rather, I don´t, because you can´t have long to live. But hey, the obesity epidemic owes little to duck legs, so go ahead and try them.

Salt and put the duck legs, skin side down, on a roasting tin or a skillet that can go in the oven, and that will fit them and a couple of cut up potatoes.

Let them brown slowly. This is so the duck begins to release fat, which is important for the potatoes. Don´t skip this step.

While this happens, cut up two biggish potatoes into chunks, but don´t peel.

Now take the duck legs out of the pan/tray and chuck the potatoes in. Turn them so they´re slicked in the fat, but don´t worry too much as there´s plenty more where that came from. Salt.

Nigella adds thyme but I didn´t have any.

Now put the duck on top, put the tray in the oven and leave it there for two hours.

If you remember, shake it a bit from time to time.

Its´done when the duck is crunchy and brown and the potatoes are crisp and deep burnished bronze.

I served it with salad, but of course peas, and apple sauce would be very very good here.

As someone who works on those cooking shows, it is refreshing to have pared down recipes that don't take two days or a production crew of 12 to make. Don't get me wrong, I am all about making my own stock and starting food for a dinner party three days prior...but when I am on set for 14 hours a day but still want to eat well those pared down recipes are a Godsend. I'll have to try the duck legs, my husband would go quackers for them! (sorry, that was bad)

The duck legs sounds great, but I am hugely suspicious of readymade stock since you introduced me to the pressure cooker stuff!

The duck legs sounds great, but I am hugely suspicious of readymade stock since you introduced me to the pressure cooker stuff!

I wonder if rendered animal fat really is so bad for us, when compared with processed vegetable oil. Of course, you don't want lard to make up a huge proportion of your diet, but it makes sense to use a byproduct of your own cooking rather than buying yet another product. Michael Pollan talks about this in 'In Defense of Food', I think.

I'll be honest - when I'm roasting duck I get more excited about the rendered fat than I do about the duck itself! It makes wonderful roast vegetables. I never thought I'd hear myself asking for more swede, but small swedes roasted in duck fat are divine. Kohlrabi also works beautifully.

The fat keeps well, so I recommend pouring off the excess occasionally during cooking. I also cut slits in the skin to help more fat to render out.

abby : I agree, if it´s pared down and done well, that´s great.
debjani: I make stock all the time, too, of course! I think nigella´s just being coy
pigsandbishops: totally right. duck fat is heavenly and I can´t wait to try those swedes you say, thanks!