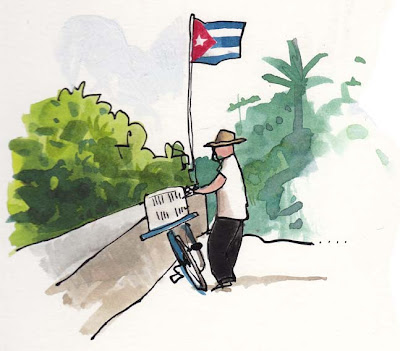 Ah, Cuba... still as shabby and as gorgeous as ever. It was great to be back, even though the tropical summre heat knocked me flat.
Being deeply in love with Mad Men I was in a swoon over all the beautiful modernist architecture. We also went to Trinidad, a beautiful town that has managed to retain its XVIII century character without looking fake and over polished (unlike some bits of old Havana).
And the food? Well, Cuba has the sort of hearty Creole cuisine that I love, and staying at the house of a wonderful cook I was lucky enough to taste the best of it, which isn´t always easy for a tourist (or a Cuban citizen).
I could give you a recipe for beans and rice, or those fritters, or the amazing Key Lime Pie we had . Instead, I think I´ll do you a favour and pass on this great mojito, because that´s the best way to win friends and influence people, and if you´d been at the book launch, that´s what you´d have had, so here goes.

The beauty of it is that it´s a mojito base that you can make and keep in the fridge for any impromptu mojito madness. It will also make serving a lot of them the work of a moment, which, you won´t need me to point out, is great for a party.

Mix well, really well, like, shake the hell out of: 1 cup sugar, 1 cup fresh lime juice, a bunch of mint (stalks and all) and 1 75 cl bottle of 3 year old rum.
It keeps in the fridge for at least a month, as the rum in the mix keeps everything fresh..

When you want to make the mojito, just quarter fill a tall glass with the mixture, add ice cubes, sparkling water and a sprig of mint. Maraca noises optional.
Posted by lobstersquad at 9:27 a. m.

I've always wanted to return to Cuba, and I hope that someday soon it will be easier for Americans to travel there. Meanwhile, I love your description of it -- a country a little bit shabby, but full of life. We visited Trinidad also, and found it charming.

Hello, I plan to go to Cuba in January and would like to stay in a room private home. Does this wonderful cook rent rooms? If so, would you please email her contact information to me at : seagrape33@yahoo.com Thank you very much, Marie

Hello!! oh my gosh your blogs are very neat!! I cant wait to try your drink and other recipes!! thank you so much! I am a artist also and love to cook!! thank you for the great ideas!

Summer's coming! That is so going in my fridge. Just a question, does the mint get stronger or do you take it out?

Lydia: I hope soon everyone can go there, because it really is a fun place.
Marie: sorry, no, she doesn´t rent rooms. But I´m sure you´ll find some good places, just follow your nose and try to avoid the big government owned restaurants.
Spoony g: well thanks!
Neil: we´re going into mulled wine mode over here! Dont´take the mint out. It looks a bit cloudy and green, but it´s ok, the fresh mint in the glass prettifies everything again.

I enjoyed reading about your trip to the island.

There's a reason Cuba is called the Pearl of the Caribbean.
And it's one I haven't been to in almost two decades. I'm sure it has changed dramatically since I left it.
But I still remember that fine, but not-too-spicy, creole cooking of cangrejos en salsa criolla, and also, the arroz congrí, or the tamales. Oh my.
I was too young for mojitos back then, but not anymore :)

sounds amazing! thanks for sharing!