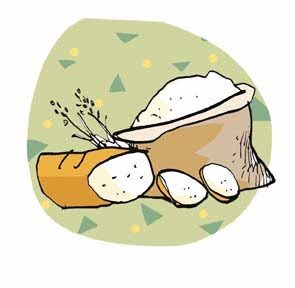 I´m on a bread kick. It happens to me every year, but I would lie if I said it led to my making all the bread I eat. Usually after a few weeks my interest peters out.
But maybe this time it won´t. My last two loaves were so stellar, they may just have hooked me.
I made two, by the old hit and run method I wrote about, except that in one I used more water and it whooshed into an airy, domed creation. I also forgot to add the yeast to it, and bunged it in later, and mixed it without much hope. But it still turned out fine, so I´m beginning to think that it´s really no big deal.

One of the loaves, the normal one, smelled very yeasty on coming out of the oven, but didn´t taste so strongly of it. Not that I mind bread tasting of yeast. If it tasted of fish, or old socks, then I would worry, but yeast? Hardly.
However, I just bought the latest River Cottage book, and since I had the baby off my hands for the whole morning yesterday, I decided to try out the sponge method.

It bubbled away merrily all day yesterday, and the kneaded dough has risen admirably overnight, and now I´m waiting for it to prove. It seems to be a slow process but there´s no hurry. I´m curious to know if the flavour is really all so much better, because, frankly, that basic elemental bread turned out beautiful, delicious, and lasted all week.

So, while I find out about the supposedly fabulous bubbling sponge , here´s the variations on the basic recipe from the other post.

I used 350 gr. white flour, 150 gr. wholemeal, about a half cup of wheat germ, 40 gr. of gluten, a tablespoonful of dried yeast and one envelope of cultured buttermilk. This last is a very exotic ingredient that I´m almost running out of, but it´s just a question of using 1 cup of milk instead of all water.
The difference in this loaf was that I used almost 400 ml of water, which made the dough impossible to handle after it came out of the machine. But so much water means so much steam, and airy bubbles inside.
A sprinkling of cornmeal on the bottom of the loaf pan makes for a very good addition to a crackly crust.
Posted by lobstersquad at 10:53 a. m.

Ximena, you can easily make your own buttermilk with your thermomix. just need to use warm (room temperature) cream and whip it with the butterfly speed 4 about 2 mins. The cream will separate in solid (butter) and liquid (uncultured buttermilk) content. Reserve the liquid and add couple of drops of Lactobacilo from your local farmacia. Cover it and the next morning there you go! I add a bit of salt to the butter or use it without salt for cakes. Have fun! Iggy

Iggy: thanks so much, I´ll definitely be trying that. I love buttermilk.