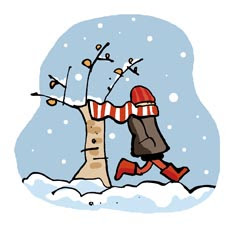 Life in December is too hectic for me. I just want to crawl into the sofa and let it roll by.
My mind is beginning to boggle at the thought of all the dinners and lunches and drinks parties that are coming. And I like food, mind you, but so much of it, in such close succession, and all so rich, I don´t know. And then the awful shopping. No. It´s all too much.
My favourite antidote is this fruit compote. Many people make it as a traditional holiday pudding, but I like to make a batch and eat it for dinner or breakfast, as the case might be. It´s very healthy and soothing, and while not bland, it´s definitely some of the least exciting food available. Which is just what you want after a lunch of jamón, foie, steak tartare and chocolate bombe.

It´s so easy I feel kind of silly writing the recipe, but anyway, here´s my favourite version. Qantities are for one person, as J hates poached fruit.

first, cover the apricots and prunes and let them soak for about an hour.

Then, tip the dried fruit with its water and the apples into a pot, cover it, bringt it to a boil, and let it simmer on a heat diffuser for about half an hour.

After that time it´ll be a sludgy golden mess, studded with the dark prunes. You might have added a cinammon stick at the beginning, but other than that, it will taste fruity and sweet, but not too much. When it cools, it will be sweeter, but never cloying (which means, of course, that you might want to add some sugar at the beginning, if that´s the sort of thing you like).

I love it with yogurt, just like that, or maybe with a bit of brown sugar. It goes very well with oatmeal, can be pressed into service as pudding with some good biscuits or cake (bought, of course!) and will even make an impressive side dish for roast pork or duck.
Posted by lobstersquad at 7:26 p. m.

I just discovered your blog and I LOVE your illustrations!

Geez, this would warm up my day. Sounds good but not too-sweet. I like that!