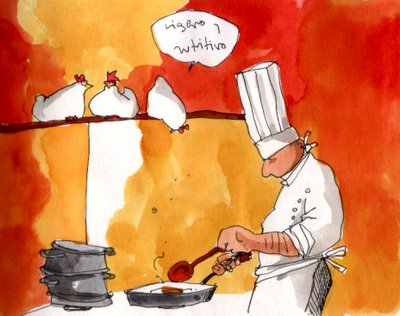 I´m still on a toasted sesame seed roll (so to speak).
I used to buy my sesame pre-toasted, but now that I´ve discovered the joys of toasting my own, it´s crazy. Since some people have asked the baffling question, where do you use them ( where don´t you would be quicker), I´ll list a few favourites:

Number one, the best: white bread toast with butter, maldon salt, honey, and sesame seeds. A breakfast fit for the Queen of Sheba.

Number two: a yogourty sauce to use as a dip for crisps, or alongside a curry or tagine,salmon or anything else really: greek yogurt, grated and squeezed cucumber, salt, chopped mint, and sesame toasted along with some cumin seeds(this is a bastardized version of both raita and dukkah, but works a treat)

Number three: the ultimate sesame slurp-fest, courtesy of the Domestic Goddess and one of my top-five store cupboard dinners.

Number four: any other noodles

Number five: this Japanese rice , of which more some other time.

Number nine: with steamed spinach, or green beans, wether in a soy sauce-sesame oil dressing, or in a vinaigrette.

Number ten: not that you´d be so rag-mannered, but licking them off your finger is pretty darn good too.
Posted by lobstersquad at 1:45 p. m.

I'll try the last two tonight!
They are good.

Uj, guess I have to tell you about the dip I always make that makes guests go: what is in that dip and why is it sooooo good?? Greek yogurt and mayo (equal amounts, but you could use more of one or the other if you prefer) - a good dose of tamari (regular soy will thin it a bit too much) and toasted sesame seeds (don't stir them in until just before you serve the dip). Serve with carrot- and cucumbersticks. That's even almost healthy! Now, off to try one and six, thanks for the suggestions!

Ximena, your illustrations are really beautiful! And I'm curious: would you mind translating the text in the speech bubble?

Fresh toasted sesame seeds are like fresh toasted pine nuts -- they really turn into a whole different food when they've met a bit of heat!

hi everyone
birx: the speech bubble says "light and nutritious"

I've just topped up on my supply of sesame seeds - as it happened, the package just arrived 5 minutes ago. How's that for co-incidence?

I thought i'd send you a note here instead as my email server at home is playing up and have been playing up for a while. Sometimes it works, other times, doesn't. Anyway, i'd like to say thank you so much for your email while i was away. I really love the marie claire illustrations! Wow. It's gorgeous!!!

Once my server gets fixed, i'll send you a note. x

Number nine is a standby for me but number two is a new idea and sounds particularly good.

Sesame seeds are all very fine, but that painting is prime!