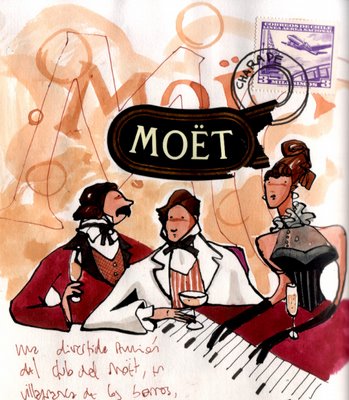 It´s a very curious thing, the Christmas basket phenomenon. I don´t know if it happens everywhere, but here, it´s crazy.

You´d think in a sane world a person would just be rated according to their looks, charm, money and cars. Not so. The status symbol is the Christmas basket, which literally shows your place on the food chain.

I have seen friends climb from the tiny three item basket to the lofty heights of a ham. I have also seen people demoted from the ham to the stick of caña de lomo, and oh, the anguish.

Others, like José , don´t know where they stand. He´s a lecturer at a public university, which makes him a funcionario. These peope live in some odd little parallel Chekhovian universe all their own. I always think that J is a higher minded soul than all that, and that he cares more about the environment than departamental backstabbing. Not so. For days, J has been fretting that everyone in the department has received a cheese, except him. He´d suddenly say, a propos of nothing, "I bet the thief is that geeky guy from the Chemistry department". Talk about who ate my cheese, uh? Then yesterday he arrived with a single bottle of wine, a cheese (well, it all happens in La Mancha, what do you expect?) and a stick of salchichón ibérico. Last year it was two bottles of wine and a cheese. He´s now worried wether that´s a step up, or down.
Tricky. Myself, I´ll take salchichón ibérico over a bottle of fair-enough tinto any day, but he´s still pondering the question.

Since I´m a lowly freelancer all I get is a book from one of the publishers I work with, and a panettone from my agent. Not for me the ultra luxurious, tall-as-a-man four storey monster, trailing masses of ribbon, and always, no matter what, a jar of peaches and a tin of asparagus. I always wonder wether those two are relics of the post war hungry times, when they´d have been the height of luxury.

Whatever they are, I do think it´s the best present you could hope to get. I´ve never heard of anyone going back to the shop to change a ham because it didn´t fit them. It´s the only thing that makes me wonder if I´d like to work in a big office.
Posted by lobstersquad at 6:53 p. m.

I love the idea of random food gifts. At least it is something you'd use!

X, I work as a free-lance too and, like you, always envied the people who worked in a big office just for the Christmas basket, but I think we can always surprise ourselves with something. And the best thing is you'll always like what you get!

no darling. you wouldn't like it at all. enjoy yyour cheese.