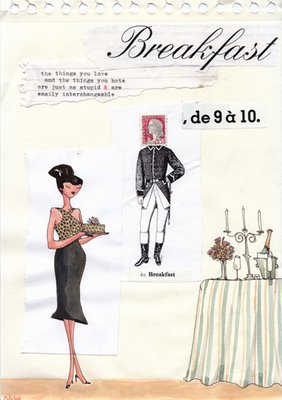 Julie has tagged me for this meme : Which Menu Would You Serve Blogging Friends For A Welcome Dinner Upon Their First Visit to Your Home? It was created by Angelika of The flying apple, and a very good idea it is.

My big quandry is, would I give my food blogger friends what I give my friends from Madrid? My failsafe options are curry, or tagine, or bottarga, or Nigella´s ham in Coca-Cola. Or else I cook a big pot of soup, bake biscuits or focaccia, and plump everything on the table, just like that.
Hardly what you´d give someone from abroad, who´s in Spain for just a few days.

Thinking hard, I´ve finally hit on this solution. I haven´t cheated. I could have taken cover under the virtual screen, and told you I´d make an entire menu from Justin Quek. But this is a dinner you might truly have chez moi, Scout´s honour. It´s ethnic, it´s pretty darn delicious, and it keeps to my rule of “make as much as you can the day before”.

We eat in the kitchen, if we´re less than six, so you´ll be sitting at the table, sipping whatever you want to drink, and while I get everything more or less ready, you can start on the aperitivo. This is a prize for the puntual people. In Spain it´s still considered rather dashing to be late, so somebody will turn up 30 minutes after everyone else.

The latecomer will miss it, and will be sorry later when he learns that I gave you the best jamón from Malandares, some pretty awsome olives I buy in bulk from the market ( I think today I´ll go with Camporeal, from Madrid itself) and boquerones en vinagre from the fish store. I drizzle some good olive oil and fresh parsley on these, and they´re as good as home made.

Then we´ll have marmitako. I love this dish for many reasons, but one of them is that it´s perfect make-ahead food. I´ll just warm up the potatoes and cook the fish in five minutes just as we´re all sitting down.

I´ll give you crusty bread, and some green salad, to lighten up.
Normally I wouldn´t make a pudding, because a carefully chosen bowl of fruit is so good. But since you´ve come from so far away, I might just go crazy and give you a beautiful glossy tarte tatin. Or I might make hot chocolate pots. Or maybe I´ll just open a tub of agujeros de Filipinos, an addictive little biscuit thing.

We´ll all end up sitting on the floor in the living room, sipping a late drink and annoying my neighbours. Isn´t that a lovely dinner for blogging friends around the world?

This is open to all comers, and as Julie says, I can´t think of anyone I wouldn´t have. But I´ll pass the torch on, just in case, to a few people, all around the globe.
That´ll be Guru in our own Canary Islands, Neil in Australia, Julie in Florida, Stephanie in NYC, Carolyn in Zimbabwe, and Mixirica in Brasil. Can´t wait to see what thye´ll give us.
Posted by lobstersquad at 8:56 p. m.

Oh! I´ve been tagged and that sounds delicious! Marmitako reminds me of my childhood summers in Santander. Looooove it!

(Needless to say I could eat boquerones en vinagre every single day .... YUM!!!)

I promise that we would be on time, there is no way I would miss the jamon! Potatoes and fish, yes, yes, yes, what a great combination. And for dessert, can I have all three...perrleease. Promise I'll go for a walk after. Great dinner, thanks for the tag.

That sounds divine. I'd be early even, to get your cooking secrets and perhaps to hog (pun intended!) all of the jamon. I have never been a big pork eater but my first time in Spain and every morning you could find me eating the serrano on croissants/crusty bread. Delish.

That dinner sounds delicious, I'd love to be your guest ;-)

Your menu is perfect. Marmitako sounds delicious (with a completely Japanese sounding name -- which is curious) and I think a one-pot meal is more intimate and friendly than a multi-course extravaganza.

Your guests are going to have a wonderful time!

You're very sensible to choose something that can be made ahead - I always plan to but manage to conveniently forget at the time of menu-planning, and thus end up staring at the kitchen walls far more than at my poor guests!

Btw, this sounds so good that when I do eventually make it to your house for dinner, I'll print this out and hold you to it! ;)

Thanks for the tag! I've already become a little obsessed thinking about my menu. For example, while having a conversation about, say, the upcoming holidays with my husband, I will suddenly burst out with, "actually, maybe the warm salad will be a better follow-up to that soup", or something like that. Yes, obsessed. I'll post this week!

Your meal sounds fantastic - can I put in a request for all three desserts???

Guru: your menu is soo so good, this was fun.
Neil: good, good, jamón always ensures punctuality
Yvo: great to have you along
Nopisto: great, thanks!
Julie: I never thought about it, but you´re right, marmitako sounds totally japanese. It´s that basque "k", I don´t know what they have against "c".
Melissa: absolutely, I hope you do, and that´s what I´ll have, promise.
Le blog: este es de los de la expo, que tiempos aquellos...

Love it! But if I come over, can I have some bottarga too? I've never had it and I'm completely obsessed with trying it!!