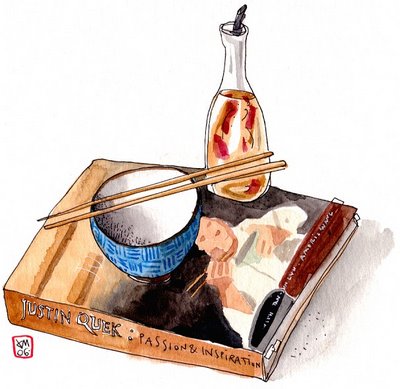 A few posts ago I wrote about Justin Quek´s book. I did so in a bubbly, overexcited way, and so of course forgot to say a few very important things. I just said it was a chef´s book. Which it is, but I forgot to say what sort of chef. He´s a real chef, a master, not some wacky talkative guy with a white jacket who blabs around on TV. He has one of the best French restaurants in Taipei, and before that he made Singapore a hot destination for roaming gourmets.All this is vouched for by a bunch of exalted people, the likes of Ferrán Adrià and Pierre Hermé.
So ok, I kind of messed up there, but thankfully,  other, better  people are writing about it in the buzzy blogosphere, so you probably know all that by now.

Now, we all know that in any cookbook you´ll only use a fraction of the recipes. That´s a given. The important thing , for me, is wether the book has a voice. When that happens, when I see the structure of someone´s cooking, and get a feeling of their personality, that´s when I find it really useful. Because then I can relate it to my way of doing things, and compare, and see what I can use, and how I can adapt it.

This has just that. It´s full of seemingly impossible things that make me dream about travelling East just to try. Which on closer reading turn out to be doable, certainly not every day, but that´s the whole point of special food like this. It´s full also of things that I´ve made already, and will make again, like vodka cream for smoked salmon, and squid ink risotto, and mushroom capuccino. I didn´t bother to froth it, sorry, I´m just not like that, but who cares? It was a beautiful, delicate soup, and that was more than enough for me.

This book is written so it can be used, not in the spirit of some demigod descended to earth to patronize the hell out of us. Plus, it makes for good reading, wether you cook or not.

So there, I hope I havent´forgotten any crucial bits of information now. Since I probably have, just check out the book, if you can.
Posted by lobstersquad at 8:37 a. m.

Yes, that's what I love about it too, its voice! And such a humble one at that - so surprising for a celebrity-chef cookbook.

You have me all curious about this book, have to go for one myself.