A recipe you can´t refuse 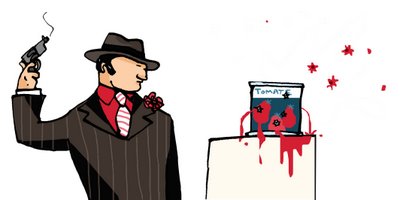 You may or may not have noticed that I´m somewhat of a movie nut. It runs in the family. People who don´t watch movies a lot find it hard to follow a conversation at our table. The references are usually to stupid films, and if you haven´t seen them, then you won´t know why we whinny every time my father says he wants to have a dog called Blücher.

I usually take it one step further, and make life altering decisions based on movies. And they´re not even good movies, half the time, which makes it something I probably shouldn´t confess in public. I cut my hair to resemble Demi Moore´s after seeing Indecent proposal. I bought a Powerbook after seeing Forces of nature. I painted my kitchen red after seeing Amelie. Embarrassing, I know, but the haircut was nice.

It makes perfect sense, then, that the first recipe I tried out for company in my spanking new red kitchen, quite a few years ago, should be what is generally referred to as  Godfather spaghetti sauce.

I´m sure you all remember the scene where Clemenza shows a nervy young Michael the ropes of cooking for a crowd. Coppola insisted on inserting it in the film. He said that if it sucked, at least people would have learnt something.The humility of true genius.

Hopefully you won´t be called upon to feed a tribe of assassins after your brother is murdered, but other than that, it´s a really useful recipe to have up your sleeve.
However, it requires time and love. When I don´t have time for that, I do a version that, while nowhere nearly as good as the original, is still pretty good.
I call it The Godfather part III sauce.

It´s very much like  this one, but mine is even simpler, and can be done while the pasta cooks. Quantities are vague. This is not about precision.

Put a pan on the hob with some water, and the rest in the kettle, to speed things up. Chop a small onion very very finely. Sautee it in olive oil over a high fire. It won´t catch if you´re stirring vigorously, so it´s maybe best if somebody else does that, while you break two or three fresh butcher´s sausages from their casings, and crumble the meat with your hands. Ask that other helpful person to put the pasta in the pan while you brown your mince well. Add a jar of tomato sauce.

Up to this point, activity is furious, but now, with the pasta safely in the pan for at least 8 minutes, and the sauce almost done, you can realx, taste, and see. It´ll probably need a bit of sugar, maybe a shake of Tabasco.

While pasta cooks and the sauce splutters, you can have a beer, lay the table, take out the parmesan, the pepper grinder and relocate the microplane. Don´t even bother with the salad.
I´ve never seen a wiseguy tucking into his greens.
Posted by lobstersquad at 8:31 a. m.

Sounds a heckuva lot faster and easier than my usual bolognese - being so short of time these days, this may be one I need to keep in mind!

i have a very similar recipe for pasta sauce. but it's your accompanying drawing that is truly first rate. lovely!

Food and movies, particularly gangster movies, makes me think of Goodfellas and the scene where Pauly, one of the crime bosses, is making spaghetti sauce in jail (he's obvlously not experiencing a typical prison stay), and Henry, the movies narrator, tells how Pauly slices the garlic so thinly that it melts away into the sauce.

Gangsters and red sauce do seem to be inextricably entwined, don't they?

Xps: raro raro raro
Ellie: it´s surprisingly delicious, considering the ease.
Kickpleat: I know, basic recipe but I just wanted to do this drawing of a gangster. I think it´s pretty cool, thanks.
Julie: I´ve always wanted to do that Goodfellas sauce, but I have the feeling I´d either slice my fingers off, or smell of garlic for the a year and a day. have you tried it?

That sounds awesome! Love the cartoon even more though ;)

I like the sound of this. I've only just had my breakfast but I'm already thinking of this for dinner.

I am the same! For some reason I always referring to a movie or The Simpsons, people think im strange but it's okay.

I must say I love that scene in the Godfather. Classic Italian.

I suppose if a wiseguy ate his greens , he might live longer....or not.

Everybody needs a fast tomato sauce.
And it's really good to understand why you do somethings - lots of folks don't have a clue why they cut their hair the way they do.

I can only gush, groupie-like, a thank you Ximena. This is a most vibrant blog - and I've silently made my rounds as a non-blogger on very many food blogs. The illustrations make me smile and the writing is so fresh, forward and inviting.

I loved the God Father movie. My favourite bit was in fact when they were cooking the spaghetti sauce!

I love your cooking description. It's funny.

Your blog always makes me chuckle and the pictures just make it all fit together. You are right, this is a recipe you can't refuse.