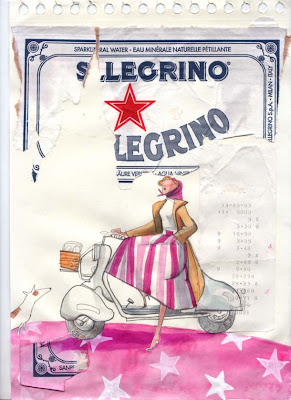 A while ago I wrote a blog post about my favourite kitchen tools. No mention of a chopping board. Not because I don't use one, but because the one I've been using for eight years is quite unremarkable.
Then my friend Simón, who is now a fantastic carpenter, gave me a new one, made with his own hands. A single piece of walnut, sleek and polished, smooth, heavy, with a narrow, long shape, glossy and dark. Beautiful. Everyone who saw it said, oh, you'll be sorry to use it, think of cutting into that perfect surface...
Silly. Of course I use it. Certainly it has a few nicks already, and will soon have more, but that's a badge of honour.

I use it for everything, every day, from breakfast to dinner. But this recipe is one where the board is crucial. You can't do it without a board, even if you're an expert in the traditional method of  chopping with one hand and holding with the other.

You'll need chicken livers. I'm never one to be annoying about these things but I think it's worthwhile to hunt down good ones, since all the nasty chemicals fed to factory chickens end up in their livers.
Garlic, or chives, or both. Parsley. Butter and oil. Salt. And some sort of liquor. I go for Oloroso Sherry but it can be anything, really.

Put a big frying pan on the fire with a biggish piece of butter and some oil. While it melts, check the livers for those slimy green bits and for any stray bits of white fat. If you're in Spain, your butcher will have done that, but still, have a look.
Salt them, and put them in the hot fat. Leave them alone until they've formed a crust underneath, and only then turn them. Now they'll need a minute at most. You want pink insides.

Take them out and let them rest on the board. Turn up the fire and deglaze the pan with the Oloroso. Now is the time to add some finely chopped garlic if you're using it. Let the sauce reduce a little and then put out the fire.

Now chop the liver into little bits, as little as you like. If you're potting it for paté then you want small, but I often have this straight away, in which case just a few cuts.
Chop the herbs you're using and smoosh it all together. It's messy, but good.

Put it in a plate, or in the terrine, add the pan juices, some pepper, check for salt.

If you're having it straight away, go for it with some toast, something sharp and vinegary (I'm currently in love with pickled walnuts) and wine, of course. And if you have some onion jam on hand, heaven.
I like it as part of a meal, with a lentil salad and a big salad, and some cheese, maybe.

If you want it cold, let it wait for a day if you can, two, even.