Soup, soup, all the time. 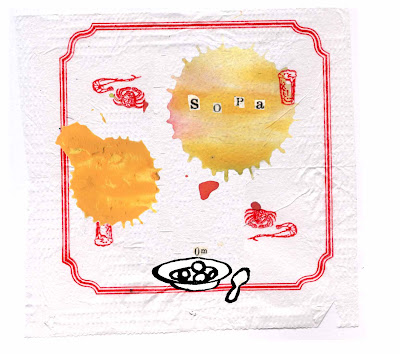 Perhaps I write too much about soup? I eat a lot of it, that´s for sure, but why wouldn´t I, when it´s just so good? It also happens to be a dish all the family can share. That makes life a lot easier, you´ll agree. Even if someone skirts around the peas and someone else has to have the meat shredded to smithereens, it´s still one pot feeds all. Magic.
Mostly I do the same soups over and over, but they´re never the same, since soup takes so well to improvising. Yesterday we had the lentil and tomato soup with barley thrown in. Instead of pureeing it with the stick blender I gave it a few swirls with the potato masher and it became a chunky mess, but wonderful.
Posted by lobstersquad at 12:33 p. m.

I am constantly singing the praise of soup to those around me, so I fully understand the enthusiasm.