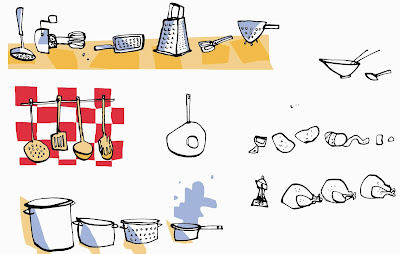 I´m a gadget-driven cook. It´s all very well to extoll the virtues of unplugged cooking, and wax lyrical about pesto lovingly made in a pestle and mortar, but for day to day food-on-the-table purposes, I´d be lost without a Thermomix, a rice cooker, a blender and a radio.

I thought a slow cooker might be a good thing, since my favourite stews are off the radar. The idea of leaving an oven on for hours in the vicinity of a danger-seeking toddler makes me pale. Plus, with two children in the world I´m beginning to feel guilty about our fuel consumption.

But slow cookers are hard to come by in Spain, and I have had a pressure cooker sitting in a cupboard since I got married almost six years ago, so yesterday I had my pressure baptism. Chickpeas in minutes convinced me in seconds, and I´ve been playing with it ever since.

My first solo flight was based on this ragù. I did´t lock the pressure valve properly, and scorched the bottom, but all the same, I had a really tasty chunky sauce that´s made a great filling for empanada. So far, so good.

The chicken stock is what has me lost in wonder. I was convinced it would come out cloudy, but tried it anyway, thinking Pía wouldn´t mind. But amazingly, in 45 minutes I had a pot of golden, beautiful, clear broth. I did skim it before locking the lid, mind you, but it didn´t take so long. So now, instead of making a giant 5 litre batch of stock every month or so, I´ll make a amaller 2 litre batch all the time. It´s magic!

I have a chunk of pork shoulder marinating even as we speak, waiting to be turned into melt-in-the-mouth shreds of aromatic meat for tomorrow´s lunch.

I´ve only been using the pressure cooking for 24 hours, so maybe it´s just a coup de foudre and I´ll drop it in a week. But I don´t think so. I think I´ll be making a lot more beans and curries and stews, and can´t wait for Lorna Sass´ book to arrive. In the meantime, it´s risotto tonigth with this morning´s chicken stock. And if that works, well, then I can see myself becoming the official pressure cooker bore, as well as the official rice cooker bore.

I have a slow cooker that I was about to banish to my trastero. Would you like it? Also, please try making lentils in your pressure cooker, there's a reason why every Indian household has one!

I too have a pressure cooker hiding out in the cabinet from my wedding! Unlike you though I am still to scared to try it! Keep posting and I think I might be convinced :)

Wait till you try it for artichokes! They cook up fast and moist. I won't get tired of pressure cooker posts and recipes, I think it's a modern wonder.

I've always been afraid of pressure cookers, ever since I was a little girl and watched the top explode off one in my grandmother's kitchen. I know that pressure cookers have come a long way since then, and whenever I read about how quickly they cook, I think maybe it's time to try.

My pressure cooker is also my friend. I found that the flavor of herbs you add with potatoes, squash, etc. infuses into the vegetable in such a lovely way. Congratulations on feeling the pressure!

Debjani: thanks! But I´m about to move, and have to cart most of my stuff to a trastero myself, so I can´t take you up on that lovely offer. It will have to be pressure cooking or now. And lentils are definitely on the list.
ChichaJo: learn to love it...it´s so great
Amy: noted, they´re just beginning to look good in the market so that´s next up.
Lydia: I was scared, that´s why I´ve waited so long to try it. But apparently all those explosions are things of the past, so give it a go.
L Vanel: Potatoes are definitely going to be a dish this week. I´m having such fun

One tip that I find useful is to use a pot/dish inside the cooker with the food (chickpeas/rice/stock) and than water outside it like a bain-marie and the food is less likely to stick or be a problem. Kind of like steaming under pressure.

Good luck with it.

Ximena, qué bien que te hayas lanzado a la rápida; now I will be able to copy everything you cook!!
Great!

Gadgets sitting in the pantry: two slow cookers, one pressure cooker, one waffle maker, one citrus juicer, one soymilk maker, one breadmaker, one mixer, a whole plethora of rice of cookers and one food processor. The only things used with even a semblance of regularity are the rice cooker and the food processor. The rest are trotted out once a year, before being put away again. And the pressure cooker has, as far as I remember, never been used.

I might bring the pressure cooker out after reading your post though. It took hours to make ribs using a conventional oven the other day.