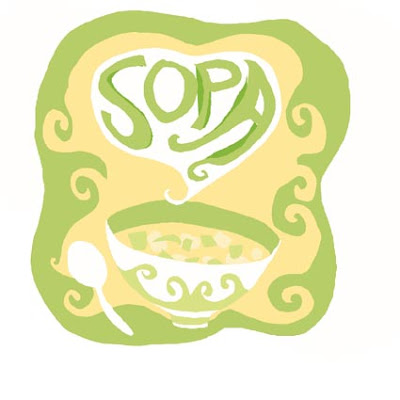 Madrid was submerged in snow last Friday. J and I caught a nice little stomach flu that´s doing the rounds, so we´ve been eating plain boiled rice and chicken and broth for days. But now that we´re almost well again, this is the thing.

The easiest soup in the world, and so good. Also I´m fond of it because I associate it with Pía´s birth-day. My last act as a civilian was to stop by the post office and pick up a parcel of books, all Lindsey Bareham´s.
This recipe appeared in all of them, and as I lolled by the pool, I flagged it. It seemed to good to be true, but it was too hot. And then P was born and that was that, until I found myself one day with leeks and potatoes to hand, a sleeping baby, and half an hour.

All you do is clean and slice leeks and peel and cut potatoes while salted water comes to the boil. The vegetables go in, are covered and left to cook until the potatoes are coming apart. This takes somewhere around twenty minutes, and requires no action on your part.
When it´s done, you taste, and say, darn, this is nothing. I can taste leeks and I can taste potatoes, but I can taste a lot of water, and I´m bored.
This is when you follow the last step: add 10 gr. butter per serving. Move it around, watch it melt, swirl a little, try it again.
You won´t beleive the magic. The little atoms of butter galvanize that big pot of soup. The flavours are brought together into a harmonious whole, the water turns from pale to interesting, and you can taste leeks and potatoes, but mostly you can taste soup, gentle and invigorating.

As a lesson in the enlivening properties of fat it has no parangon. It is the soup I would teach a beginner cook, and a no-fat fanatic. Just a little spoonful per bowl, and it turns potatoes to gold.

The instructions are really and truly as simple as described above. The quantities:

Ah, simple soups are always the best. With the addition of a bit of dill from the garden, and a few grinds of black pepper, this is a soup I make often.

Thanks for sharing this simple but delicious soup...leeks, potatoes, butter...sounds perfect! The weather is cooler here now so this is a great time for soups :)

sorry about the flu! but this soup looks lovely. i love potatoes in soup...so very comforting.

So that's where I went wrong! I too made leek and potato soup a while back and I tossed in some milk (or was it cream?) but it was so boring. Now I know - add butter! Thanks!

You have snow?! We've yet to have more than flurries this year.

I like leek and potato soup and haven't made it all winter. This is a good reminder.

This is an all times British favourite though we use to put in the saucepan the diced potatoes and sliced leeks first along a generous portion of butter and let it to warm up for a while (lets say 20 min) lid on. Adding some chicken broth just to cover and simmer until done, you'll get potatoes and leeks soup. If you let it to cool down and pour it on to a food processor adding some cream after, you'll end up with a nice vichysoise.
Regards,
Enric Murio

Mmmm. You know I'll need that from early March onwards :)
Did you season it with salt & pepper as well? Or just salt?
Give a hug to the little Pia from me and K - we are both looking forward to meeting her one day!!

Lydia: simple is best. and of course the pepper is essential
ChichaJo: this is best for cold weather
Kickpleat: flu over and all well, thanks
Su-Lin: I used to have the same. Milk and cream all very well in their way nothing like butter.
Julie: proper snow. Only for one day, though. But I´d´never seen it in Madrid.
Enric: I used to make it like that, too, but this method is much easier and quicker, you´ll see.
Pille: this is a perfect nursing soup, I guarantee!

I make a soup like this a lot, but with just a teaspoon of parmesan garnishing the top. It's good with cheddar as well.

Hola!
Gracias for the tip on Potato-Leek soup! It's perfect for those I'm-not-feeling-too-good days, or when your taste buds are on overload. Nice and soothing.
BTW, have you ever had Mexican albondigas soup?
Saludos desde California
Me encanta Espana!

Oh, and I forgot: Your drawing absolutely floor me!