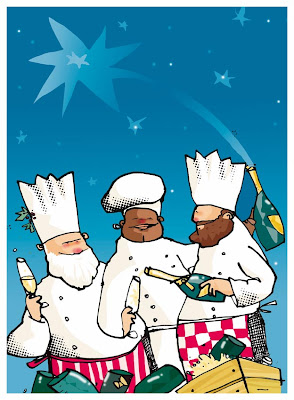 I know I said yesterday that I´d keep my posting to one a week. But that´s starting from next week.
You see, my dear friends, even though I´ve had more than enough of tinsel, coloured lights, mindless cheer and silly presents, the fact remains that here the holidays are still alive and kicking. We still have the last hurdle to get through, Reyes.
I´m a well-known Reyes grouch, as can be seen by last year´s post , but I won´t go into that again.
Instead, I´ll give you the recipe I promised for stuffed capon.
It´s not a suitable recipe for right now, but you can file it away, because it´s good. A beautiful plump bird, stuffed to the brim with meat and other goodies, it´s basically a combo of two favorites; meat loaf and roast chicken.
On the night, we serve it with mashed potatoes, red cabbage, apple sauce, sweet chestnuts and glazed onions. No wonder I can´t leave the sofa for days after, uh?
It also makes divine sandwiches, with chutney and mayo.

The bird can be a small turkey, a big chicken, a capon, a guinea hen, whatever. Just make sure it´s a properly brought up specimen from a good family. And ask for it to be de-boned (also ask for the bones so you can use them another day).

The weight of the bones will give you the quantity of meat for the stuffing. Somewhere around 1,5 kg of pork meat. You can substitute some of that for fresh sausage meat if you prefer.

In a big bowl, mix the meat with the almonds, eggs, prunes, apples. If you like, you can throw in some slivers of raw chicken liver, too.
Salt, pepper, nutmeg to taste, and a good glug of brandy.
Squish with your hands until you have an evenly distributed mix.
Proceed to stuff this into the bird, making sure you get meat into every last little nook and cranny.
The bird, which in the beginning looked deflated and very sorry for itself, will begin to look like Popeye on steroids.
Don´t overstuff, though, or it will burst later (not that big a deal).

Now´s the tricky part. Take a tick needle and stout thread, and patch the skin. Apart from the two big cavities, there will be little nicks where the butcher was too zealous. You must sow these carefully, again, to prevent the juices from oozing out.

Slice a couple of onions and lay them on a baking tray. Salt and oil them a little, and manouver the bird on top. By now it will be heavy and unwieldy. Ask for help. Dot it with butter, douse with brandy, and begin to roast.
It will probably need three hours, with occasional topping up of the tray with water and brandy as the sauce dries out, and occasional basting.
If you have a meat thermometer, let it work its magic, but if not, you´ll probably know it´s done when it looks golden, crusty, and has made every last corner of the house smell heavenly.
The gravy can be served as it is, or blended till smooth and light caramel in colour.
Posted by lobstersquad at 11:34 a. m.

A bird stuffed with a meatloaf? I've never heard of anything quite like it! What a fun idea -- even though we don't celebrate Reyes, it's a great excuse to give this a try.

Wow. I may have to make this just to say I did it. Forget Turducken! This is way cooler!

I really love this artwork. And the last post's one. They seem quirkier, in a good way!
Happy new year!

Lydia: It´s not only great, it could be a perfect foil for a host of your favourite sauces later, in its sandwich stage.
Reyes: están tajadillos, sí. También puedes hacerlo con pechuga de pavo estirada, enrollada y atada. No es tan espectacular pero está rico.
Ann: well, provided your butcher bones the bird, it´s not even hard to do, so...
June2: these two drawings are from 4 years ago. I´ve obviously grown old and staid since then!

Um, can I come over please? I though I had had enough of holiday food but your menu of roasted capon, red cabbage, chestnuts and the rest has me swooning. I AM eating for two, after all.

That sounds lovely! I feel like I can smell it from here :)

Is Reyes like 3 Kings? Because my family celebrates it here too...this year we had a brunch with all sorts of breakfast foods :)

I love stuffed birds, this is great!

If I could find a butcher that would debone a chicken or turkey, I'd make this in a moment. Maybe I need to make it my mission to find a butcher who actually does that sort of thing.

Aimee: congrats! it´s just the thing to feed an army, so never mind two.
Joey: three kings, absolutely, the epiphany.
Cakespy: leftovers are the best thing about it, I think
Xps: no sé, un poco borrachines los veo
One food guy: can´t miss with this one.
Julie: you can use the filling for a spread out turkey breast, and then roll and tie. It´s pretty good like that too.