Heartburn: the book, the movie, the carbonara 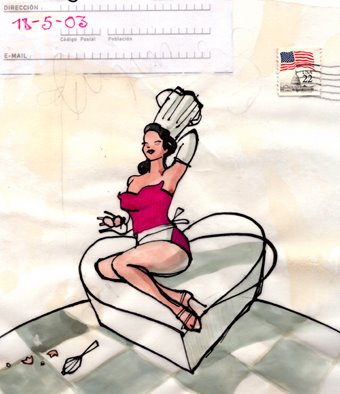 I don´t know if you´ve read Heartburn , but if you haven´t, do, because it´s a very funny book about a cookbook writer. The thing is chock full of food, and even has a few recipes. It was written before the Craze That Swept The World, and isn´t self-conscious in its foodiness.
Plus, it has the über foodline "pesto is the quiche of the eighties", later used in When Harry met Sally, to great effect.

I´ve had the book for ages, but it wasn´t until I came across a reference to the film in Nigella´s Feast that I even knew the film existed. A quick Imdb search, and I saw that it was made by Mike Nichols 1985 with Jack Nicholson and Meryl Streep, music by Carly Simon. I was intrigued. Why wasn´t it more famous? Was it one of those overlooked masterpieces, like Love in the afternoon, or Soapdish? Or one of those good-on-paper, bad-in-bed star vehicles like About a boy?

It´s neither. An ok film, but nowhere near the book. It has carbonara, though, which the book doesn´t.

The first time they sleep together, Meryl cooks spagetti carbonara and takes it, in the pan, with two forks, to Jack, who´s still in bed. He wiggles his eyebrows in that wicked way of his, and she says, very indignant, "Usually I never cook on the first date, you know"

In her recipe for carbonara, Nigella writes about this scene, and then blithely gushes about " a panful of hot pasta, to be taken back to bed and sharingly slurped". Which is all very well, but I´m too bourgeois not to worry about my nice sheets. And judging from the mess José makes eating at a normal table, I shudder to think what he might do in bed with a bowl of pasta. We wouldn´t be married now, so it´s good news that I don´t cook on a first date, either.

I´ll spare you the writing of another carbonara recipe. You probably have one you like already, right? If not, here´s one . I do it like that, minus the garlic, and adding a splash of vermouth to the bacon and then reducing it to a fatty caramelized jus.

You don´t have to eat this in bed, of course, but it does lend itself to lazy times. I suggest the sofa, deep bowls, and maybe even Heartburn, the movie, which won´t distract you from the pasta.
Posted by lobstersquad at 11:35 a. m.

I am always looking for new good reads, I will have to find it!

carbonaras leave me feeling lethargic and tired, but I could definetely do with a new read - must make a trip to Borders tomorrow!

Ximena, this is too odd- We just watched Heartburn this past Friday night! I appreciated the carbonara scene, but I agree that pasta in bed makes me a little nervous too. I'm also not one to eat a large meal in the middle of the night unless it's after a long evening of drinking! I liked the movie, but I didn't know the character is a cookbook writer in the original book. Movies rarely do justice to the books, and, yes, Soapdish is an overlooked masterpiece!

I guess you are talking about "Se acabó el pastel" isn't it? I just looooove the soundtrack!!!!

I haven't read that book in ages but I remember enjoying it; Nora Ephron is a funny writer. I also remember making a pasta with uncooked tomatoes from one of the recipes which I think was the first time I'd ever seen a recipe like that.

ooooooh. what a greeeeeat idea! adding the vermouth to the bacon.... two of my favorite things in the whole world
this i must try!

I loved Hurtburn, but as a carbonara lover I have to say that I envy the couple eating it in bed in the middle of the night but I know that some of you think it's disgusting...
It's the risky business of getting to bed with Jack Nicholson!

I'm so glad you mentioned this book and movie! I'd recently been thinking about trying both; I guess the release of Ephron's new book and a recent New Yorker article reminded me of her and got me asking myself why I hadn't. I've read such pans of the movie in the past that I was afraid to see it. I'm glad to hear you say it was at least OK.

Your line about the mess in bed had me cracking up. I'm always (half) jokingly pointing out to my husband the difference, after a meal, between my pristine placemat and his totally messed-up one.

Thank´s a lot for reminding me this film. It´s ages since I last watched it and I loved it!!! Mmmmm ... I feel like having some pasta right now .....

What a cute post, Ximena! I haven't heard of Heartburn, but now I'm sufficiently intrigued...even if it's just so-so, I have to see that carbonara scene! And read the book too.

This book sounds good and as someone surrounded by movie all day at work, im surprised I have never heard or seen of the film as well. I must keep my eyes peeled next time i'm at a bookshop.
And i'm totally with you about the sheets, no eating!!

Hi
Bea: excellent read, I promise
Ellie: they leave me pretty dead , too, perfect autum pre-siesta food.
Julie: if you like Soapdish, we´re evidently twin souls!
Whiteteapot: in Spain it´s called "escándalo en el plató"
Julie: Love Nora, very much.
Ann: that´s Nigella´s trick, forgot to say
Guitars: too right, I´m not sure I´d dare to go near JN
Lisa: What is it with some men and the breadcrumbs?
Guru: read the book, it´s good
Molly: thanks. See the film, but read the book first, otherwise there´ll be spoilers.
Jenjen: I know, I couldn´t beleive I didn´t know about it. Film mysteries.

OH, and forgot to say, I adore your drawing with this post. I want one for my very own!

I think you folks were just too young! The movie actually made a bit of a splash when it came out, especially with Meryl Streep dying her hair dark and all. I agree the book is better; ditto for About A Boy (Did you read his other book, How to be Good?) Twenty years later I had forgotten that she was a cookbood writer, though. And I just can't imagine taking a pan of hot pasta to bed; I mean, wouldn't the pan be hot? Some foods can be eaten in bed, like scrambled eggs, popcorn, and certain sandwiches, but a pan of hot pasta - never!